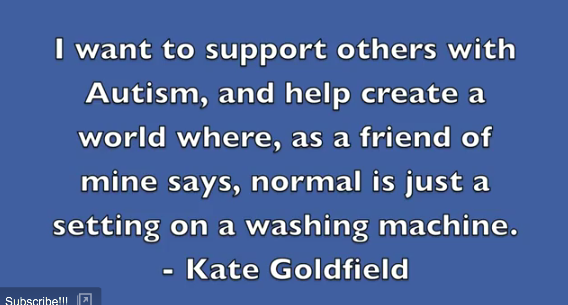 This time last year, I hadn’t been diagnosed with Autism. I was currently in the assessment process which would confirm whether I did, or did not, have Autism. I still remember the day I was diagnosed, though it seems like a blur. I recall feeling shocked and numb for a while as it took a while to sink in what had happened. It was a long wait which included frustration and tears (I’m not the most patient of people…)

My Eating Disorder Therapist was the first person to pick up on possible traits of Autism as we’d been working together for quite a while and it was apparent that I was having difficulties engaging in Therapy. The idea of Autism had never been mentioned to me before, nobody in School or College noticed any signs and just passed me off as being shy.

You’re probably thinking, `why have you been diagnosed later on in life?’ In which I can answer – Autism is easier to hide in Females, as we have a tendency to copy other people around us as a means of fitting in, meaning we hide the signs alot easier than Males. However, the number of Females being diagnosed as Autistic is currently on the increase as more people are becoming aware of Autism and the signs. Males are also commonly diagnosed later in life too which is perfectly fine. It doesn’t matter when you get diagnosed, but it’s such a relief when you do.

I used to be ashamed and embarrassed of my Autism because I was terrified of being judged; if people wish to judge it’s their problem not mine. I didn’t like my new ‘label’ and I thought it would change many things, though anything that has changed has been for the better. Everybody who knows about my Autism has been very understanding and kind and I’m so grateful to have those people in my life.

My Autism hasn’t changed me, it’s opened my eyes to the person I’ve always been and the struggles I’ve always had.

Autism is a developmental condition -not a mental illness- which affects 1 in 100 people. It is present from birth, you don’t develop or ‘catch’ Autism later on in life. Due to my Autism I find certain aspects of life difficult and, as a result of this, I have high levels of Anxiety and I have learned how to adapt to things in a way which is more comfortable and better suited to me. For example, I struggle with communication so I get people to do the talking on my behalf as often as I possibly can. I also struggle in other areas such as social situations, busy and loud places, using public transport alone, understanding sarcasm, understanding other people’s feelings, thoughts and emotions. I struggle to fit in with people as I’m awful at making and maintaining conversations, therefore, I enjoy the company of animals much more and would happily spend my days sitting talking to them. Autistic people tend to have a main interest and can find it difficult to spend their time on anything else.

Autism carries lots of stigma and it’s time to stamp it out. Many people associate Autism with Children who’re misbehaved or Children who’re interested in trains. I can confirm that I am a young person with Autism and my interest doesn’t lie with trains, but with animals. Some people believe that Autism only exists in Males when this isn’t the case as Autism can be diagnosed in both sexes. People have negative views on Autism, but I’d like to point out that Autism doesn’t make anybody a bad person and the only bad people are the ones who choose to criticize it rather than understand it.

Thanks to my diagnosis, I now understand why I do and say things in a different way and I am slowly beginning to accept that it isn’t wrong, it’s just how I am and the way I’ve developed. My communication is improving slowly which is scary but necessary I guess. I understand why I don’t enjoy things that other people my age enjoy, including going to parties and to pubs drinking. I’d much prefer to stay home with my Cat and duvet watching Disney films.

I’ve met such lovely, inspiring people since being diagnosed and I’ve learned lots of life lessons from them too. One of these people include my support worker who is incredible and the one of the most helpful and supportive people I’ve ever had the privilidge of working with. I wouldn’t change my diagnosis if I had the option to, Autism is a part of me and it does not define me in any way, shape or form.

We want acceptance and understanding, not judgement and criticism. We see The World differently, but that doesn’t make us strange, it makes us intelligent and bright.

Thank you for reading! Be sure to check out the National Autistic Society for more information.