We arrived at Ding Darling National Wildlife Refuge, a non profitable organisation located in South-West Florida, at 8:15am. After an hours drive was required to reach our destination.

The Wildlife Refuge is located on Sanibel Island, in the Gulf of Mexico, Southwestern Florida and is compromised of 6400 acres.

We are a nonprofit that financially supports nature conservation, wildlife protection and education efforts for J.N “Ding” Darling National Wildlife Refuge on Sanibel and Captiva Islands in Southwest Florida.

The refuge gained its name after a local cartoonist (Jay Norwood Ding Darling) who prevented the land from being sold which was due to be used for other purposes. The conservationists remained well known for the creation of his duck stamps, essential stamps that have to be purchased in order to enter the refuge.

Jerry (a current volunteer at Ding Darling) presented a factual powerpoint presentation giving an indication into the past and present history of The Wildlife Refuge. The talk was both authentic and inspiring and allowed us to consider the activities we could engage in to better our planet, and to occupy conservation efforts. Jerry also, mercifully, introduced us to his wife – Belinda, who was also a current volunteer at the refuge.

Jay Norwood Darling blocked the sale of the environmentally valuable land on Sanibel Island. Darling also convinced the President at the time (President Truman) to sign an executive order to create the Sanibel National Wildlife Refuge rewinding back to 1945. Moreover, the refuge changed the name to ‘JN Ding Darling’ in 1967.

Profits made at the refuge following visitor entrance fees and gift shop purchases, amongst generous public donations, is put towards conservation efforts that are carried out throughout the entirety of Ding Darling. Alas, the refuge alarmingly receives no Government funding, but works entirely to protect species and to encourage the next generations with their creditable efforts and high work ethics.

The Ding Darling Wildlife Society pays for essentials that The US Government fails to prioritise. The money is raised through various fundraising activities, aswell as through the visitor centre.

Carolina Parakeet: This species is the only species of parakeet that lives in The US. However, the species went extinct back in 1939, and the last known species tragically passed away in captivity (Simpsonati Zoo).

Passenger Pigeon: This species passed away in the same cage as the late Carolina Parakeet, though during the sooner date of 1914. Passenger pigeons are reliant on forests to aid their survival, but the species struggled to adapt to changing environmental conditions due to market hunting which wiped out the forests.

Moran and aesthetic nature preservation: John Muir is the President of the Sierra Club, who composed that ‘Nature deserves to exist for its own sake regardless of the degree of usefulness to humans’. The preservation exists and helped to establish The National Park Service in 1916.

Modern environmentalism: The industrial explosion occurring as a result of WW2 added new environmental concerns, which therefore allowed the Environmental Agenda to be expanded in both 1960 and 1970 to begin to include: Atomic weapons testing, fossil fuel issues, air and water pollution and wilderness protection.

The first National Earth Day began in the 1970’s as a result of an establishment of the EPA (Environmental Protection Agency).

Global concerns have increased over time, due to an expansion of greater technology and communications alongside a better understanding surrounding different concepts and ideas, with previously little information available in relation to them. Environmental events and concerns are now reported Worldwide, therefore we gain an understanding into issues and improvements occurring around The World. The events also reported both locally and regionally.

The refuge allows visitors to view a vast selection of animals in their natural environment, including 245 bird species which occupy a larger diversity throughout migratory seasons (January-April).

We walked around the refuge, witnessing charismatic red mangroves which gain their distinctive redness due to a lack of oxygen. The mangroves appeared to be home to bird species, including the white ibis perching upon a mangrove branch. 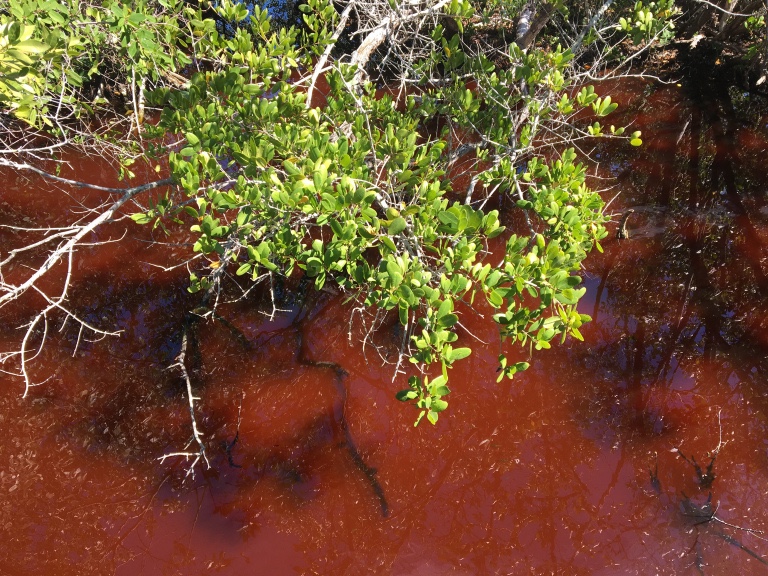 A normal, unharmed, manatee bone typically weighs roughly 2lbs, but with damage, the bone’s weight suffers an increase of a dangerous 6lbs.

We read the tragic story of a glorious manatee named J.Mullett, who became known during her first sighting on March 11th, 1996, whilst understanding the causes of her unfortunate mortality. Mullett first became sighted in Crystal River, FL and was easily identifiable because of the healing wound located behind her head, amongst significant propeller wounds from her mid-tail to tail base.

She also had a pit tag fitted beneath her skin to help locate and identify her.

The manatee was released back into the wild (Crystal River) on December 5th 2000, after 2 years of seeking rehabilitation (starting January 2nd 1999) at Lowry Park Zoo for her noted injuries.

Mullett suffered abnormal signs of breakage in her ribs, therefore developing an abnormal growth following an impact with a boat. (Air boats are popularly used throughout The Everglades, despite not being very environmentally or wildlife friendly, to encompass a range of species).

Manatees often appear in areas of human activity, which have big associations with the numbers of declining manatee in The World, often becoming injured from boat propellers, which can cause swelling in the muscles surrounding the tailbone, which negatively impacts the manatees abilities to swim efficiently, and without difficulties.

A necropsy case file revealed the avoidable causes of Mullett’s death. She received multiple strikes from passing by boats in the area she was inhabiting, which caused abnormal bone growth in both her ribs and her skeleton. The findings also informed us that a discarded fishing line was found located in her small intestine and colon, again, highlighting the human impacts upon marine life. The fishing line caused multiple injuries, including internal damage and the blockage of her intestines, which fabricated eating, digesting and defecating difficulties.

Devastatingly, Mullett had given birth to her calf and was said to be nursing her just 6 days before she gruesomely died.