I was diagnosed with high-functioning Autism in 2016, aged 19. Originally referred to as Aspergers Syndrome.

I had no knowledge surrounding Autism. I believed my Therapist had confused me with another patient.

I succeeded through two nurseries, two mainstream schools (Primary and Secondary), and had recently finished my College life. And not once had the word Autism been mentioned to myself or anybody in my family. A Teacher said to me (after informing her about my referral), “I don’t think you seem Autistic, Laura”. 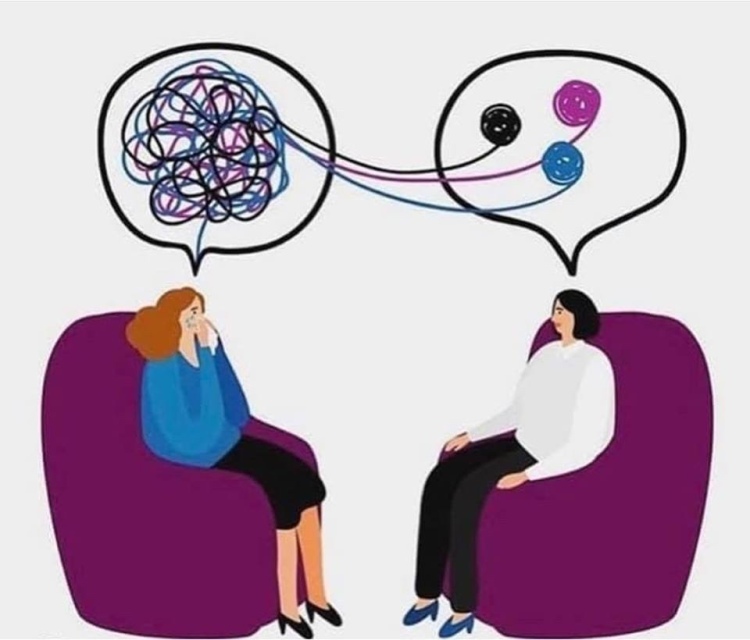 Increasing numbers of people are beginning to receive an Autism diagnosis later on in life as traits are better recognised and detected. Autism doesn’t end after Childhood. It’s a lifetime diagnosis, where we learn to manage our struggles whilst learning more about ourselves as individuals on the spectrum. I’m amazed that I managed to mask my symptoms for such a long time, considering the inability I had to act in School Drama lessons.

The mutual assumption seemed to be that I was shy, I would “probably” grow out of it with age. I became a favoured student as I just got on with things, paid close attention to minor details in my assignments and didn’t kick up a fuss. I rarely displayed meltdowns in education, but I would (and still do) run away from stressful situations. I held other “typically Autistic” attributes. Such as high sensitivity levels, routine favourability and difficulties maintaining friendships. I particularly despised having supply Teachers taking over due to sickness (for example), as this issued a change in routine and structure.

I’d been working weekly with my Eating Disorder Therapist for a long duration of time. We hit a brick wall in terms of treatment, following the difficulties I had with expressing my feelings and emotions (an essential component in taking therapies!) We tried a collection of techniques together, some of which worked better than others. At one point, we resorted to an “emotions wheel” where I had to point to the word in which I was feeling.

My Therapist contacted Trafford Extended Services (Manchester), following a discussion with myself, my Mum and my Psychiatrist. My Therapist had detected “possibly Autistic” traits in me. Ie: The difficulties I have understanding sarcasm and taking everything literally, the struggles I have with maintaining eye contact and the ways in which I would use laughter to cope. I also found it impossible to tolerate change as it leads to distress and discomfort, which is why my Anorexia remains so complex and difficult to treat. It was then a waiting game.

I ran home every day waiting for the greatly anticipated referral letter to be pushed through the door. And, to my dismay, the wait lasted for 6 months. We attempted to speed up the referral process, but services are stretched and limited, which made this difficult. I became distressed, the wait was agonising and my mental state began quickly deteriorating as I spiralled further into my Depression. I tried to remain humble as I understood others had lengthier waiting periods than I had. I struggled to tolerate with “not knowing”. I had so many questions, and I evolved many unhelpful assumptions about myself and my abilities throughout the waiting process.

I then received an appointment, which involved 2 assessors from the team coming to my home. This simply involved an introduction about the service, the process and a general chat about my life, past and present. There were queries about friendships, family life, my interests and so on.

The assessors (one named Mike, the other… I forget) returned to my house 2 weeks later for an individual discussion with my Mum. I believe this was again, about my personal life, characteristics and such, but I chose not to delve too much into this for Mum’s privacy reasons.

Finally, I was invited to take part in a practical assessment away from home, with a mere 15 minute drive to Barnett House. I engaged in a test called an ADOS test (The Autism Diagnostic Observation Schedule). This took place in a small room under the observation of Mike and a lady I hadn’t previously met before, named Cath. I was given a brief explanation regarding the process and had to take part in various tasks to gain an insight into the understanding I have regarding different scenarios and situations.

Further information on ADOS can be reached, here:

I was tasked with reading from two different Children’s books, both containing no words, which heightened the confusion I had surrounding the task at hand. Later on, I understood that the aim of the task was to test my ability to understand and read facial expressions/emotions. To which I completely ignored, as I focused more on the objects and animals on the diagram.

Other tasks included basic demonstrations. I particularly enjoyed choosing random objects from an enclosed bag to proceed with telling my own short story. Of course, my story involved animals (my “special” interest).

2 weeks later, I was diagnosed with Autism. Mike and Cath came to my house to reveal the findings of the assessments, where I sat anxiously with my Mum waiting for the unknown to become the known. Information of my diagnosis was issued to us extremely casually, almost like “Yes. You have Autism”. 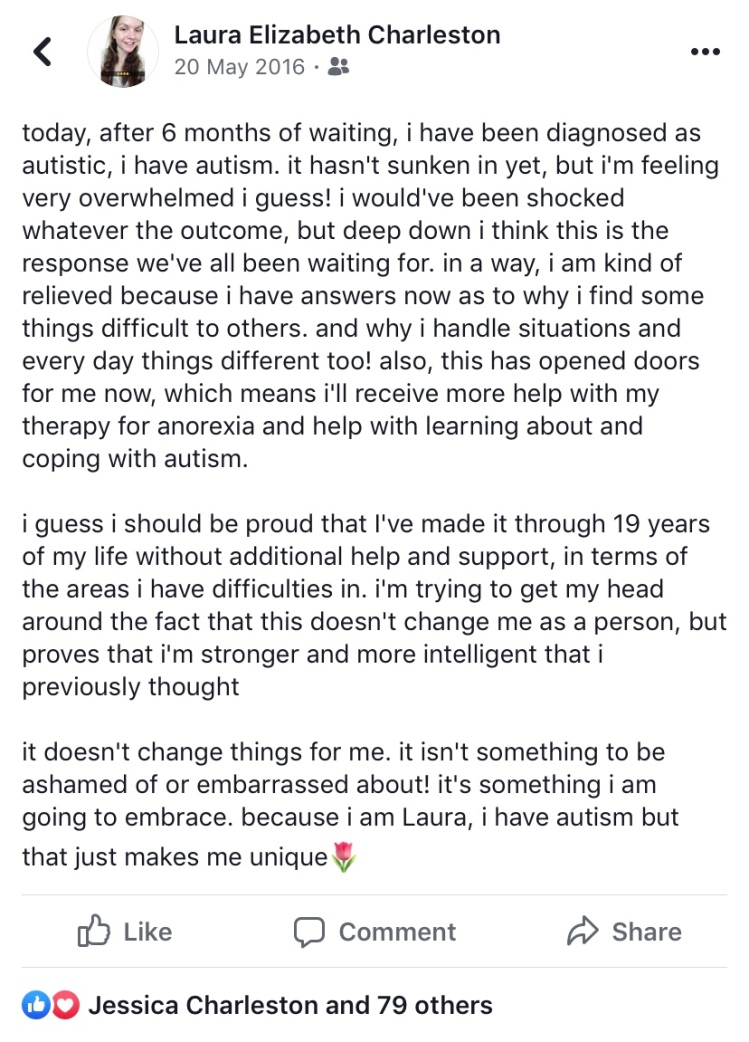 I was asked numerous times how I felt after receiving the news. I still struggle to pinpoint this as I felt multiple things all at once.

Mainly, it was confusion. Numbness.

How exactly do you react to finding out you have a diagnosis you’d been oblivious about up until adulthood?

I struggled for weeks, months and years to accept my Autism diagnosis. I attempted to sugarcoat this in the beginning in a bid to hide my true feelings and thoughts. But I spent a lengthy period focusing on the negatives, using my “new” diagnosis to define myself and coming to terms with what this meant for me.

I learned to come to terms with my Autism diagnosis with the help of weekly appointments with my Autism support worker (Cath, who I mentioned previously) which lasted for approximately 16-months. And with the assistance of attending weekly group sessions (for ten weeks) amongst other newly-diagnosed adults, which covered a range of topics each week and also allowed me to learn more about other people, their experiences and their struggles.